Most Celebrated Hindu Festivals in India 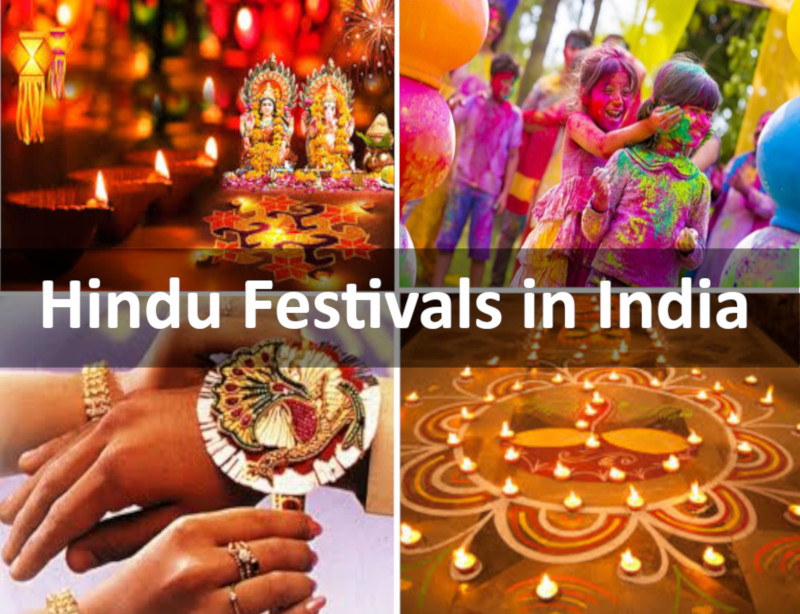 What is a Hindu Calendar

Indian Hindu Calendar refers to the astrological calendar also known as Panchang, Panchangam or Panjika. It has evolved over the years after several modifications have been made to it, Only the names of the twelve Hindu Calendar months are same otherwise there is some difference between the regional variations of the Hindu Lunar calendar. The first ever Hindu calendar came into existence in the late BC period with the help of various astronomical principles.

There are numerous Hindu festivals celebrated across India and all over the world wherever Indian Hindus reside. These festivals are celebrated by performing different activities like keeping a fast, community fairs, performing Aarti or Pooja, charity, praying to deities, etc. There are various events as per the Indian mythology like seasonal changes which are the reasons to celebrate these festivals.

Festivals are the reason people in India come together and celebrate. India is a multifaceted land with people of different cultures living together in harmony and unity. Each of the festivals has its own significance and charm. People look forward to each and every festival and celebrate them with full vigor and passion.

These festivals are also called as Parva or Tyohar. There are so many fasts & feast to be kept and people clean up the houses, wear new clothes and greet each other on the festival day.

Some of the prominent Hindu festivals are as follows:-

Diwali– Deepawali is the most important Hindu festival celebrated in India. Also known as the festival of lights, it is the symbol of the victory of good over evil, light over darkness. The significance of Diwali dates back to ancient times when Lord Rama came back to Ayodhya after winning Lanka and having spent 14 years of Vanvaas. The festivities of Diwali continue for five good days starting from Dhantrayodashi and going on till Bhaiya Dooj. The houses are cleaned up (process begins 1 month before!), people purchase jewelry and new clothes, prepare different delicacies, burst firecrackers, distribute sweets & dry fruits, etc.

Holi– Holi is another important Hindu festival which is the symbol of fun and frolic. As per traditional Indian mythology, Holi is played on the next day of Holika Dahan which has a historical significance as Prahalad was saved by Lord Vishnu and his evil aunt Holika was burnt to death. She was the sister of HiranyaKashipu who ordered her to kill his son Prahalad.

The Holika Dahan is celebrated on the Phalguna Purnima, and people throw color and water on friends, relatives, and others. There are various delicacies prepared for the guests on the day of Holi.

Rakhi– Rakhi is another famous Hindu festival, also called as Raksha Bandhan. The significance of this festival is related to the thread that the sisters tie to the wrists of their brothers. It is widely believed that this thread protects the person who wears it. The history of Rakshabandhan dates back to ancient times when Goddess Indrani tied the thread to the wrist of the Lord Indra who eventually won over the demons and evils. Rakhi is the symbol of gratitude and love which depicts the bond between the brothers and sisters. The basic ritual in a Raksha Bandhan is performing Aarti, putting a tika on the forehead with red color and then tying the thread on the wrist of the brother.

At mPanchang, Hindu calendar in Hindi is also available for the readers wherein you can find all the relevant info about various Indian and Hindu festivals, auspicious time and rituals to be performed.