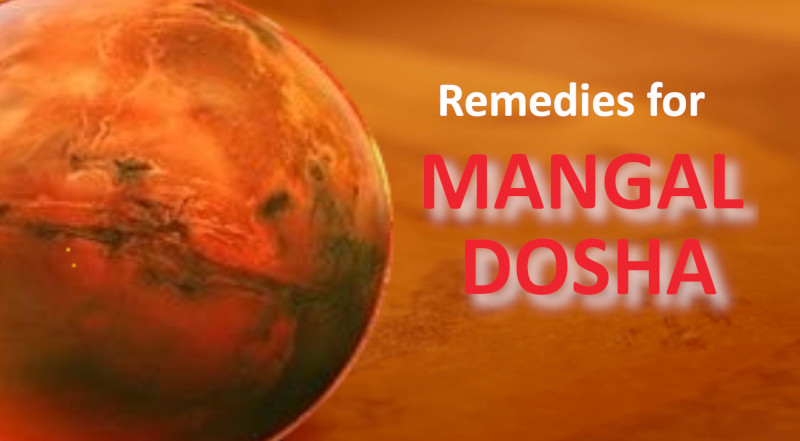 What is Mangal Dosha?

In Hindu Vedic Astrology, Mangal Dosha is believed to be an astrological effect that happens in one’s Kundali if Mars is placed in the 1st, 4th, 7th, 8th, or 12th house of ascendant chart. 2nd House is also considered in South Indian Astrology. A person born with such astrological combinations are known as Manglik.

Mangal Dosh is also known as Kuja dosha, Bhom Dosha or Angaraka Dosha. This Dosha can have adverse effects on the native.

This Dosha can have harmful consequences in a marriage, causing troubles, tension/depression in a relationship, giving way to extremely difficult situations in one’s marital life and other more serious issues in the long run. This is accepted to be caused due to the “red hot” nature of the planet Mars, named after the Roman lord of war. Additionally, if two mangliks wed, its negative impacts counterbalance each other. However, Mars isn’t the main planet in Astrology that should influence the relationship and these impacts should be studied in a more extensive point of view of overall astrological compatibility.

There is a conviction that the negative results for a single manglik marriage can be settled if a manglik performs Kumbh Vivah, in which he/she “weds” either an idol of Lord Vishnu (preferably gold or silver), a peepal tree or a banana tree.

Side effects of Mangal dosh

A Manglik person should observe fast on Tuesday. He/she should eat only toor daal. Out of all the remedies fasting on Tuesday is also considered as an effective remedy.

Manglik person should chant the Navagraha mantra which is known as Mangal Mantra on Tuesday. Wake up early in the morning, take bath and chant Gayatri mantra for 108 times. You can also chant hanuman chalisa regularly.

Making donation and doing charity every Tuesday is an effective remedy for Manglik Dosha. Some things that a Manglik can donate to nullify the adverse effects include red lentils or food made with it, sharp objects, red gemstones like coral, red silks or wheat bread.

Eating and drink in silver utensils is also considered as one of the remedies.

Do feed birds and small animal with grains, fruits and sweets.

One of the remedies is worshipping Mangal deva on Tuesdays while chanting the following mantra “kraamkreemkraumsa bhaumaya namah”.

Making a voluntary donation of blood every quarter of the year, if possible.

Find out whether you are Manglik or not using a Mangal Dosha Calculator. To know more about such astrological remedies for various Doshas and Effects, visit mPanchang.